In today's politically correct society a friend can be defined as anywhere between a dear kindred spirit and an associate that's tolerated for various self serving reasons.
Government and institutions create situations, control the outcomes, and profit from it. Are you falling prey to them?
The average family spends more on some form of tax than it does food, clothing, and housing combined.
"All the perplexities, confusion, and distress in America arise from Downright Ignorance of the nature of Coin, Credit, and Circulation."
- John Quincy Adams. 1829
Create more wealth without spending any more money or facing any market risks.
Create more wealth without spending any more money or facing any market risks.
Is it better to feed a man a fish today or is it better to teach a man how to fish for himself so that he may feed himself for life?
Financial organizations tend to profit from our misconceptions.
"To have respect of persons is not good. For a piece of bread that man will transgress."
- Proverbs 28:21
"Everyone should be involved in two businesses: one where you make your money and a Family Business where you keep your money."
- Carlos Lara and Charles Griffin

How Deflationary Forces Will Be Turned into Inflation

The ongoing financial and economic crisis has not only stoked fears that it will end in inflation — as central banks will print up ever-greater amounts of money — but it has also given rise to a diametrically opposed concern: namely, that of deflation.

For instance, in December 2011 Christine Lagarde, head of the International Monetary Fund (IMF), warned that the world might risk sliding into a 1930s-style slump, such as the Great Depression.

This episode was characterized by worldwide defaulting banks, a shrinking of the money supply (or, deflation), which in turn led to falling prices across the board, sharply falling production and drastically rising unemployment.

In today’s fiat-money regime — which contrasts with the gold-exchange-standard that was in place in many countries at that time — the possibility of deflation appears fairly small indeed.[1]

This becomes obvious if one takes a look at the workings of today’s fiat-money system, a system in which the money supply can actually be increased at any point in time in any amount deemed politically desirable.

Central-bank money is a “monopoly product,” produced by the central bank, typically through loaning to commercial banks.

Equity capital comes from investors who are willing to invest their money in commercial banks, thereby becoming owners of the banks.

If, for instance, the minimum reserve rate for demand deposits is 2 percent, the banking sector as a whole can produce $50 of credit and fiat money with each $1 of central-bank money (that is 1 divided by 0.02).

Government regulation requires commercial banks to back up their “risky assets” (such as loans and securities) by a “minimum” equity capital. If, for instance, the minimum capital requirement is 8 percent, a bank can produce $12.50 of credit and money (that is 1 divided by 0.08) with a given $1 of equity capital.

Against this backdrop we find that the lower the minimum reserve ratio is, the more credit and fiat money the banking sector can produce with a given unit of central-bank money. And further, the lower the capital requirement and the risk weightings are, the higher will be the leverage banks can build up with a given amount of equity capital.

In “fighting” the credit crisis, the US Federal Reserve increased US banks’ (excess) reserves drastically as from late summer 2008. As banks did not use these funds (in full) to produce additional credit and fiat-money balances, however, the credit and money multipliers really collapsed.

The collapse of the multipliers conveys an important message: commercial banks are no longer willing or in a position to produce additional credit and fiat money in a way they did in the precrisis period.

This finding can be explained by three factors. First, banks’ equity capital has become scarce due to losses (such as, for instance, write-offs and creditor defaults) incurred in the crisis.

Second, banks are no longer willing to keep high credit risks on their balance sheets. And third, banks’ stock valuations have become fairly depressed, making raising additional equity a costly undertaking for the owners of the banks (in terms of the dilution effect). 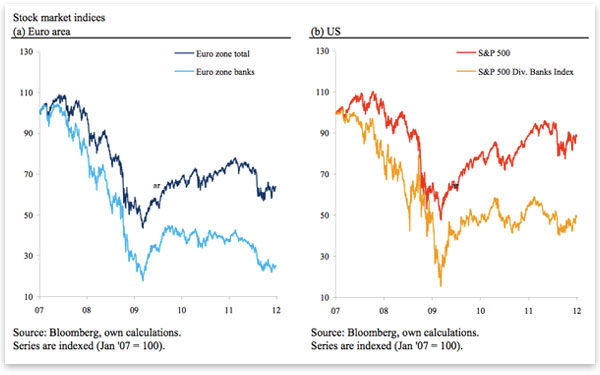 The latest developments suggest that banks are about (at least for now) to start scaling back their risky assets in relation to their prevailing capital base. In other words, banks are adopting a strategy of “deleveraging” and “derisking.”

Such a strategy can be put into practice by, for instance, refraining from rolling-over maturing loans granted to, say, corporate, consumers, and public-sector entities — something that will in a fiat-money system result in a decline in the outstanding credit and fiat-money supply.

Alternatively, banks can reduce their risks by selling off assets so far recorded on their balance sheet. This would also reduce the outstanding money supply — as the buyers of bank assets would pay with existing demand deposits, which are thereby literally “destroyed.”

Given that investors in bank capital become unwilling to expose their money to credit risks, let alone want to assume new credit risks, the fiat-money system, which has been highly inflationary in the last decades, would turn deflationary.

The chances for a full-fledged deflation (that is a decline in the money stock) are fairly small in a fiat-money system, however, first and foremost because deflation runs counter to vital interests of government and its close associates.

This group includes, for instance, those who are directly employed by government, receive business from government, and invest their lifetime savings in government bonds.

What is more, mainstream economists, who undeniably exert an important influence on public opinion, keep saying that deflation, because of its allegedly devastating economic and political costs, has to be avoided by all means.

The political incentive structure, combined with the antideflation economic mindset, really pave the way for implementing a policy of counteracting any shrinking of the fiat-money supply with all instruments available.

And the shrinking of the fiat-money supply can be prevented, by all means. For in a fiat-money regime the central bank can increase the money supply at any one time in any amount deemed politically desirable.

Even in the case in which the commercial banking sector keeps refraining from lending to the private sector and government, the central bank can increase the money supply through various measures.

By monetizing outstanding or newly issued debt, or by purchasing foreign currency, the outstanding money stock can be prevented from shrinking — “or by ‘printing’ money and somehow distributing it to the public as a transfer payment.”[2]

In an effort to “fight” government and bank defaults, major central banks around the world have already started expanding their balance sheet. They purchase government bonds against issuing new central-bank money and provide commercial banks with any amount of central-bank money required to keep them afloat. 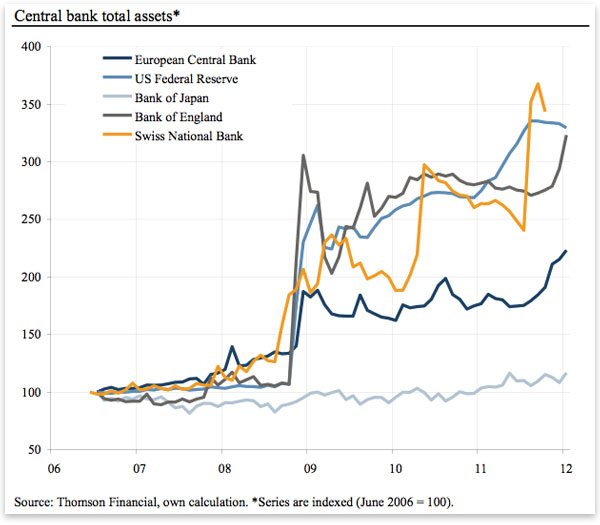 The fiat-money supply can presumably be increased most conveniently through a policy of monetizing outstanding as well as newly issued government debt — as there will be strong public support for keeping governments liquid.

Governments would then be the very apparatus through which the bulk of the new money trickles into the economy — which also means a drastic expansion of government’s share in the economy at the expense of individual liberty.

The growing influence of government over the money supply therefore runs the risk of causing even bigger misuse of the printing press going forward, a finding that has all too often been confirmed by government’s meddling in monetary affairs.

However, any deflationary forces in the ongoing demise of the fiat-money system will most likely prove to be temporary in nature. In fact, the real threat is and remains high, even very high inflation.

Categories : Inside
The Inside Perspective
Accumulation of Assets – Only Half a Plan
The Fall of Communism in Virginia
Postwar Rent Controls
USPS: The Cursed Carriers
Inflation Targeting Hits the Wall
How Deflationary Forces Will Be Turned into Inflation
How Mises Rebuilt Economics
Defending the Gunslinger
Emersonian Individualism
How The Stimulus Racket Works
Explaining Central Banks’ Gold Purchases
Europeans And Their Tax Rates
Why the State Demands Control of Money
How to Fix the Housing Crisis
“Yad” (a Hebrew word) means “Open Hand”
A Primer on Jobs and the Jobless
Lower the Debt Ceiling
There Is Life After Default
Planet of the Taxpayers
Compromise! Compromise! Compromise!
The Battle to Keep the Government in Check
The U.S. Debt Limit: Questions And Answers